Anniversary Bands: Diamonds and Beyond 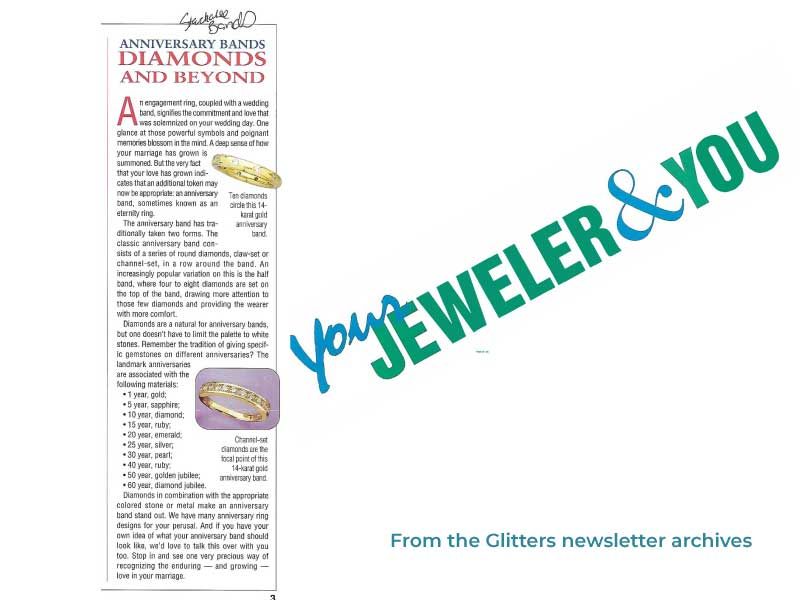 An engagement ring, coupled with a wedding band, signifies the commitment and love that was solemnized on your wedding day. One glance at those powerful symbols and poignant memories blossom in the mind.

A deep sense of how your marriage has grown is summoned. But the very fact that your love has grown indicates that an additional token may now be appropriate: an anniversary band, sometimes known as an eternity ring.

The anniversary band has traditionally taken two forms. The classic anniversary band consists of a series of round diamonds, claw-set or channel-set, in a row around the band. An increasingly popular variation on this is the half band, where four to eight diamonds are set on the top of the band, drawing more attention to those few diamonds and providing the wearer with more comfort.

Diamonds are a natural for anniversary bands, but one doesn't have to limit the palette to white stones. Remember the tradition of giving specific gemstones on different anniversaries? The landmark anniversaries are associated with the following materials:

Diamonds in combination with the appropriate colored stone or metal make an anniversary band stand out. We have many anniversary ring designs for your perusal. And if you have your own idea of what your anniversary band should look like, we'd love to talk this over with you too. Stop in and see one very precious way of recognizing the enduring - and growing - love in your marriage.