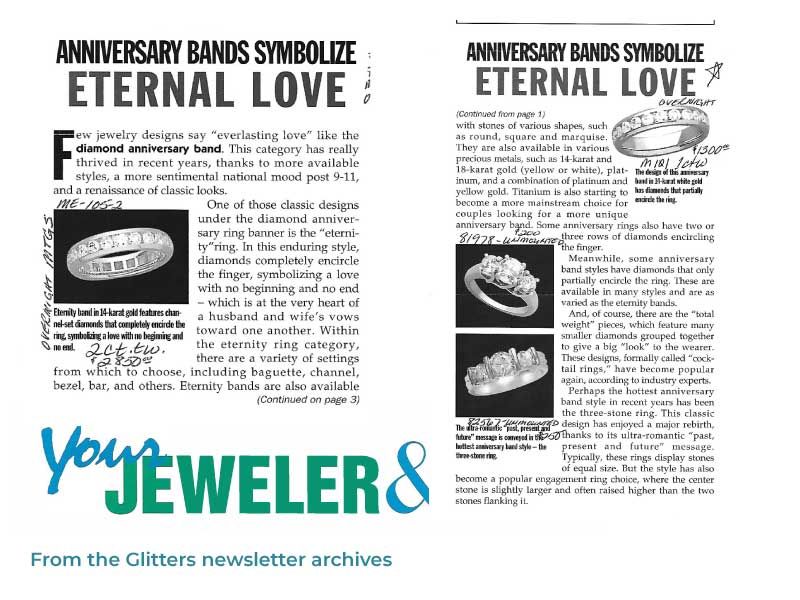 Few jewelry designs say “everlasting love” like the diamond anniversary band. This category has really thrived in recent years, thanks to more available styles, a more sentimental national mood post 9-11, and a renaissance of classic looks.

One of those classic designs under the diamond anniversary ring banner is the “eternity” ring. In this enduring style, diamonds completely encircle the finger, symbolizing a love with no beginning and no end – which is at the very heart of a husband and wife’s vows toward one another. Within the eternity ring category, there are a variety of settings from which to choose, including baguette, channel, bezel, bar, and others. Eternity bands are also available with stones of various shapes, such as round, square, and marquise. They are also available in various precious metals, such as 14-karat and 18-karat gold (yellow or white), platinum, and a combination of platinum and yellow gold. Titanium is also starting to become a more mainstream choice for couples looking for a more unique anniversary band. Some anniversary rings also have two or three rows of diamonds encircling the finger.

Meanwhile, some anniversary band styles have diamonds that only partially encircle the ring. These are available in many styles and are as varied as eternity bands.

And, of course, there are the “total weight” pieces, which feature many smaller diamonds grouped together to give a big “look” to the wearer. These designs, formally called “cocktail rings,” have become popular again, according to industry experts.

Perhaps the hottest anniversary band style in recent years has been the three-stone ring. This classic design has enjoyed a major rebirth, thanks to its ultra-romantic “past, present and future” message. Typically, these rings display stones of equal size. But the style has also become a popular engagement ring choice, where the center stone is slightly larger and often raised higher than the two stones flanking it.