Go for the Green! 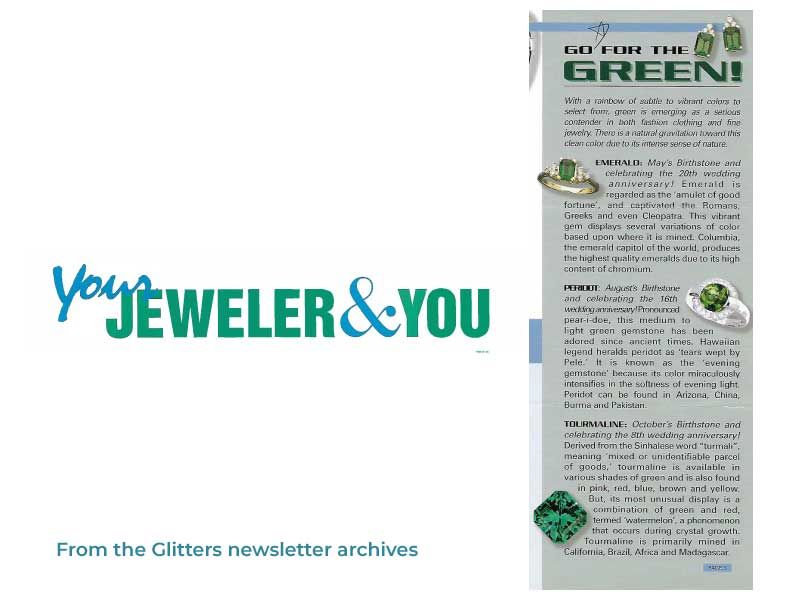 With a rainbow of subtle to vibrant colors to select from, green is emerging as a serious contender in both fashion clothing and fine jewelry. There is a natural gravitation to this clean color due to its intense sense of nature.

Emerald: May’s Birthstone and celebrating the 20th wedding anniversary! Emerald is regarded as the ‘amulet of good fortune’, and captivated the Romans, Greeks, and even Cleopatra. This vibrant gem displays several variations of color based upon where it is mined. Columbia, the emerald capitol of the world, produces the highest quality emeralds due to its high content of chromium.

Peridot: August’s Birthstone and celebrating the 16th wedding anniversary! Pronounced pear-i-doe, this medium to light green gemstone has been adored since ancient times. Hawaiian legend heralds peridot as ‘tears wept by Pelé’. It is known as the ‘evening gemstone’ because its color miraculously intensifies in the softness of evening light. Peridot can be found in Arizona, China, Burma, and Pakistan.

Tourmaline: October’s Birthstone and celebrating the 8th wedding anniversary! Derived from the Sinhalese word “turmali,” meaning ‘mixed or unidentifiable parcel of goods’, tourmaline is available in various shades of green and is also found in pink, red, blue, brown and yellow. But, its most unusual display is a combination of green and red, termed ‘watermelon’, a phenomenon that occurs during crystal growth. Tourmaline is primarily mined in California, Brazil, Africa and Madagascar.